Valducan #1 -- Off to a winning start 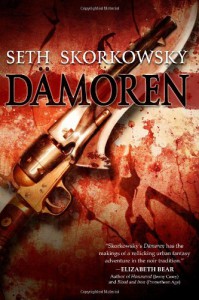 In a genre wildly over-populated by cheesy vampire/demon/werewolf love stories and bad supernatural detective schtick, Damoren is a breath of fresh air from the first chapter to the last.

From the start, the reader is treated to a very fresh take on the monster-hunter concept and the monstrous foes themselves -- a thread which is enjoyably woven non-stop throughout the book.

The idea of monster-slaying weapons imbued with holy or magical properties has been a staple of legendary storytelling since before Perseus faced Medusa. Damoren elevates the whole concept to the next level, bringing the weapon to life as a character in a way as profound as the flawed hero who wields it.

There is a deep and authentic sense of history throughout Damoren lending dimension to the Heroes and Villains alike, as well as playing perfect companion to the events of the story and the emerging mythology of the series. That impressively well-developed sense of history, both regarding the Valducan Order and the rising menace they face, gives the fantastical aspects of the tale an anchor of gritty, tangible realism.

Flighty and fanciful magic is absent in Damoren - replaced refreshingly with dark, ominous, symbolic ritualism of a ghoulishly Lovecraftian tone.

Action-packed, well-conceived, well-plotted, well-paced, and well-told, Damoren brims with the kind of fantastical history and mythology that makes genre-buffs' mouths water plus enough good old-fashioned creep-factor to raise more than a few hairs along the way.

I rabidly devoured Book One of Skorkowsky's Valducan series and can't wait to get my hands on Book Two when it's released.